Even if not immediately visible to the naked eye,
hail damage can significantly reduce the performance of your modules. 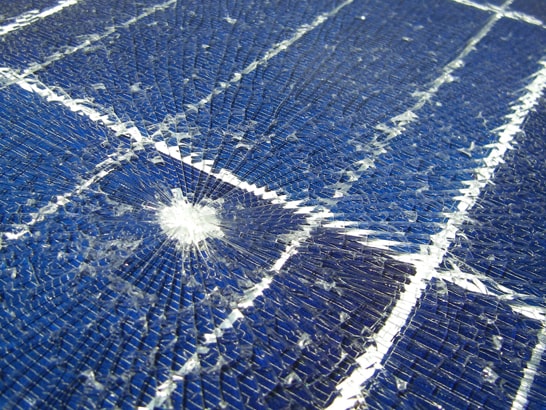 Do you have any questions about detecting hail damage to solar modules, or other individual requirements?

Hail damage to PV systems
can be significant

As brief as hailstorms can be, they can often cause significant damage. Depending on the size of the hailstones, there is often significant damage not only to vehicles and plants, but also to PV modules in particular. And with climate change, not only the has the frequency of hailstorms increased – the size of the actual hailstones has also increased. Furthermore, the difference in the degree to which different regions in Germany are impacted by hailstorm damage is evening out.

Let us assess your solar modules
for hail damage

Cotact SUNLAB after a hailstorm to have your modules checked for damage. You then have the opportunity to react and prevent any performance impairment. Minor damage that may not be immediately visible to the naked eye can also affect the performance of the modules.

Hail can cause
the following damage:

These are often not visible to the naked eye, but affect the life of the module.

Detecting glass damage to the solar module from hail

This usually involves obvious damage to the glass surface of the module. As a result, the entire system may fail.

This can lead to performance impairment, for example, due to an insulation fault.

Inspect all your modules for visible damage. If damage is visible to the glass surfaces, water may have already entered the modules. It that case you must: Switch off the PV system immediately to avoid a short circuit. End users should also consult their local PV installer. Contact...

Let SUNLAB assess your modules for possible damage after a hailstorm. If you don't assess possible damage, you run the risk that your modules will not deliver the performance they intended to deliver. If in doubt, please contact us. Our team will be happy to advise you on the need for a professional module test. Contact...

In order to claim damages on your insurance, we recommend that SUNLAB carries out an assessment. Any damage will be identified and catalogued using professional advanced technology. We would be happy to act as a contact person for your insurance company in order to provide professionally verified results for claims settlement zu liefern. Contact...

The following information and codes will help you to find us in search engines:

Detecting hail damage for insurance purposes. Detecting hail damage to the photovoltaic system. Focus on precision right from the beginning. Functional testing and assessment for damage to the PV system solar modules. This can be detected in the photovoltaics at the outset. Microcracks caused by hail impair the function of a module. This aspect is also of interest for building insurance, as well as to operators of photovoltaic systems. Ultimately, you want to avoid a reduction in the performance of your solar modules. However, after a storm, cracks in cells can be detected. Assessing damage to solar cells using methods such as electroluminescence. And detecting such damage. Also EL measurement of the module. If other relevant codes are used: EN standard protection.

SUNLAB can make invisible hairline cracks clearly visible to PV system operators. In the event of light and current analysis. For manufacturers and other interested parties. Show fluorescence right from the start. The testing may initially lead to costs compared to modules that have not been tested. However, when damage has been detected, the results have an effect since the customer can then make the correct conclusions, such as to replace items.

Email us if you have any further questions. We will be pleased to advise you!